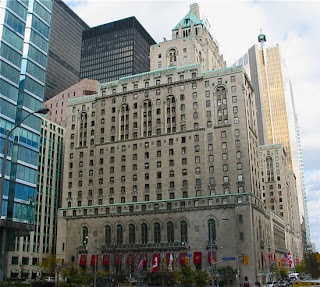 The Fairmont Empress in Victoria isn't the only hotel celebrating the upcoming nuptials between Prince William and Kate Middleton. April is Royal Month at the iconic hotel on Vancouver Island, and they're throwing a huge party. Elsewhere across the country, there are other early morning wedding celebrations from British Columbia to Ontario. And no shortage of tea parties.

The Princess Package-A Royal Wedding Experience. Check into the hotel Thursday afternoon, April 28 and awaken on Friday at 2 AM PDT for the live screening of the Royal Wedding in the hotel's Blue Moon Theatre. Enjoy tea and scones in your jammies! After the broadcast, retire to the Lobby Lounge for morning High Tea. Then it's back to your room for some more sleep, with a late check-out of 2 PM. From $355 CAD, with additional nights at $259.

The Royal Wedding Breakfast begins on April 29 at 3 AM in 900 West Lounge. Watch the live broadcast on the lounge's large screen TVs. Breakfast is a three-tiered hot breakfast platter, including the hotel's signature scones, along with coffee or tea. Cost is $29; call 604.662.1900 for reservations. Breakfast Television's Dawn Chubai will be filming live from the hotel lounge beginning at 5:30 AM. Wear your best breakfast outfit and bring a fancy chapeau for a Royal Wedding hat contest. The top hat wins a one-night stay at The Fairmont Hotel Vancouver, including Afternoon Tea for two.

Enjoy an early morning classic high tea party in the Driftwood Lounge starting at 2:30 AM. The high tea menu includes scones and finger sandwiches, along with other house made treats. Open to both Wick guests and anyone in the Tofino area. Cost is $20; call 250.725.3100 for reservation

The hotel has hosted three successive generations of the British Royal Family: Her Majesty Queen Elizabeth II, Prince Philip, the Queen Mother, Prince Charles, Prince Andrew, Prince Edward, Princess Margaret and King George VI. On April 29, beginning at 5 AM, Royal Tea will be served in the Library Bar to accompany the live broadcast. The menu includes: Premium Fairmont Loose Leaf Teas, Seasonal Berry Cocktail, Traditional Finger Sandwiches, Pastries (pastry swans, clafoutis, chocolate cakes, madelines) and Royal York Cranberry Scones with Devonshire Cream and Preserves. Cost is $35. In EPIC, which will also broadcast the wedding live, enjoy the Royal English Breakfast: Two eggs any style, bacon rashers, black pudding, baked beans, braised mushrooms and hash brown potatoes. Cost is $21.
South of the 49th Parallel, there isn't quite the frenzy as in Canada, although the Queen Mary Tea Room in Seattle is celebrating the Royal Wedding with an early morning bash. I'll be watching with a gaggle of gals from home during a Royal Wedding Mimosa Jammie Party.

Fairmont Royal York in Toronto has accommodated many a royal over the years
Photo by Sue Frause
By SUE FRAUSE at April 25, 2011

You guys must be nuts! But if you pay me to stay up, I'll consider your offer...

Maybe a little royal nuttiness, huh? I'm recording it and having a Royal Wedding Mimosa Jammie Party starting at 6 AM west coast time ... !

Both of the sure are good couple, Kate Middleton is so beautiful and gorgeous. Prince William sure knows what he is getting into. I can say that they are both lucky with each other. Epic

I'll be watching the marriage ceremony marathon with my gal pals. A Royal Wedding Mimosa Jammie Party ... bring on the bubbly!

The world is awaiting for Royal wedding after so many years a marriage is in the royal family i hope both of them will live happily life along together with some one or two children so let us wish they will be the best couple of the world for the year of 2011.