BC Ferries loses $5.5 million in first quarter, 400 sailings to be cut 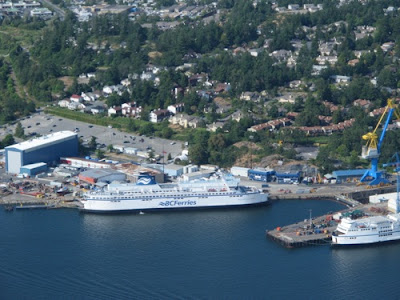 BC Ferries announced its first quarter results on Aug. 24, 2011. The numbers are nothing to smile about. With net losses at $5.5 million for the first three months ending on June 30, 2011 it's a stark contrast to the net earnings of $0.9 million in the first quarter of 2010.

According to CBC News, BC Ferries plans to cut up to 400 sailings a year and lay off staff on its major routes. Click on to watch the video.

In the first quarter of fiscal 2012, BC Ferries experienced a decline of 3.3 per cent in
vehicle traffic and 2.9 per cent in passenger traffic compared to the same quarter last year. According to BC Ferries, it's the largest first quarter year-over-year decline in passenger traffic in recent years, and is a twenty-year low. Vehicle traffic is at an eleven-year low. BC Ferries doesn't anticipate a turnaround in the erosion of traffic in the foreseeable future, and says the year end loss could be significantly higher.

They never should of privatized it as much as they did. It used to be part of highways system and was run as such, neccessity over profit.

Our Washington State Ferries are part of WSDOT (Wash State Dept of Transportation), so in effect part of the highway system. They are so poorly run that it's ongoing fodder for all of us who rely on them. Fares are going up another 2.5% in October. And since I live on an island, that hurts ... I do think your BC Ferries are much nicer amenity wise (cleaner, better food + services, etc.). And the workers don't seem as grumpy as ours!

I haven't been on a Washington State Ferry so I can't comment on them, however before privatizing some of B.C. Ferries, they were still clean, nice staff and even dining rooms with white table cloths! I guess my point is that for years people up the coast and on the island/islands could count on the ferries being there regardless of profit or not. It must be frustrating for people who need the ferries to see this happening. ( althought the sailings cut is not a done deal, they province has to agree )It impacts business etc. It's not like we have a choice, we need the system. I guess both private or provincial/state run systems have pros and cons.