Irene pounds Quebec and the Maritimes with wind, rain (VIDEO) 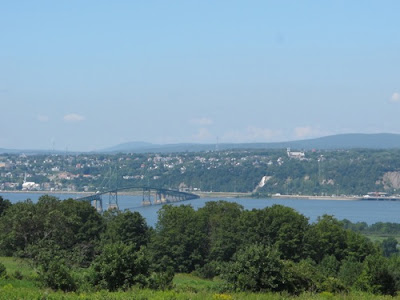 Quebec and other eastern Canadian provinces were hit hard by Irene, even when it was downsized from a hurricane to a tropical storm. Here are news stories about it: Irene lashes Eastern Canada and Hurricane Irene: Strong winds, heavy rain for Montreal.

There's a video on YouTube of the wind whipping the waters off the coastline of Ile d'Orleans. I was on the island earlier this month, and the first news reports described the island as being located 300 km from Quebec. It's actually about 15 minutes from Quebec City! Here is the translation of the video description (via Google Translate):

Shortly after high tide, see the state removed from the St. Lawrence River near Quai de St-Jean, Île d'Orléans. At that time, Tropical Storm Irene approached the area and at the height of bad conditions. After took this video I went to sample the wind down the dock with a portable anemometer, measures 70 to 85 km / h. At the same time, the station automated weather located about twelve miles north-east recorded gusting to 113 km / h.

Environment Canada posted this wind warning for the Matana area of Quebec on Aug. 29, 2011: "At 11:00 AM, post-tropical storm Irene is located near Sept-Îles and keeps tracking northeastward. Heavy rain still affects a few regions of the north shore but will taper off this afternoon. Strong to high southwesterly winds will also affect some areas of the north shore, of the Gaspé Peninsula and of the Lower North Shore."

The Ile d'Orleans Bridge, also called the Pont de l'lle, as seen from Ile d'Orelans. The suspension bridge spans the Saint Lawrence River over to the Beauport borough of Quebec City. Photo by Sue Frause.