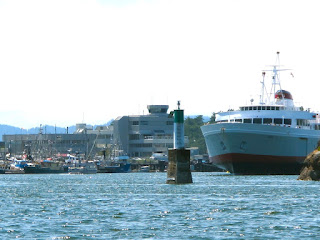 Just in time for Canada's May Long Weekend (May 19-21) and Memorial Day Weekend in the US (May 26-28), the Black Ball Ferry Line launched its expanded spring schedule this week. Beginning May 17, there are six sailings a day on the M.V. COHO's scenic 90-minute voyage between Port Angeles, WA and Victoria, BC. The COHO departs Port Angeles daily at 8:15AM, 12:45PM and 5:20PM. The 8:15AM and 5:20PM are new departure times, marking a change from previous schedules. Return sailings from Victoria to Port Angeles are at 10:30AM, 3PM and 7:30PM daily.

An annual Memorial Day weekend event is the Swiftsure, hosted by the Royal Victoria Yacht Club, May 26-28 in Victoria. It's the oldest and largest annual yacht race in the Pacific Northwest, attracing more than 200 competing yachts and 1,400+ racers from British Columbia, Washington, Oregon and California. The annual event features family maritime activities on the city's waterfront.

Between May 23-25, people may view the Swiftsure yachts in front of The Fairmont Empress Hotel and tour a 70-ft. racing yacht. Other activities include the Swiftsure Beer Garden at Ship Point in Victoria's Inner Harbour, inflatable toys for kids at Ship Point, and a pancake breakfast at Clover Point. See the complete list of Swifsture public events for details.